Today is the first day of the new year 2020 and we are ready to go Big game Punta Cana Fishing. I, as usual, stood on the pier of the port of Punta Cana and was waiting for my guests. 5 people were supposed to go fishing today, but I did not know who it would be. 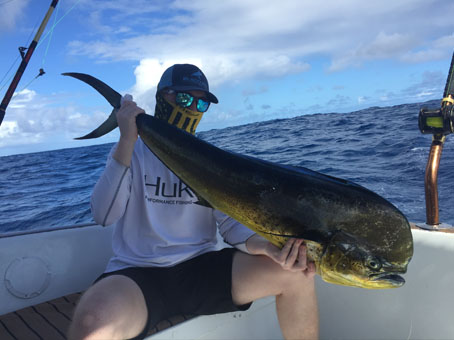 The transfer came right on schedule and I met 5 men ready for fishing. Today we did not plan to go to the lagoon; we were 100% ready for the ocean. I was definitely pleased with this because I had long wanted to try out new lures and reach the point where the reef rock is broken underwater and the way there takes about 2 hours.

So after 5 minutes we were already on the boat and were ready to start. Another 20 minutes later, we already straightened gear and threw the first bait into the water. Throwing the bait, we offered our clients drinks and prepared to wait. The state of the ocean was bearable, but the wave was short and beating, and this caused a feeling of uncomfortability. I asked our guests whether everyone had drunk the pills for motion sickness and received an affirmative answer – I calmed down, noting in my head that a return to shore due to seasickness was not expected.

We continued to move away from the coast and tried on our way to the reef rift to see hunting birds or floating algae. And suddenly the sound of the reel and the first bite. We shouted to our fishermen and one of them went down to the lower deck. On the hook was not a big baccarat and our fisherman coped with exhausting with ease. Putting the fish in a box, we curtained the bait into the water and prepared to wait.

After about 25-30 minutes, we saw hunting birds and added gas and went in their direction. The ocean in that place was seething; there was a feeling that a shark or some other big fish was driving smaller ones. We walked right above them and held our breath. And here he is the long-awaited sound of the reel! According to the fishing line, it was clear that something big was on the hook, but it was not clear whether it was Mahi or Wahoo. Most likely a big Mhi bull – I thought and turned out to be right. The fight with the fish was about 20 minutes, the fish jumped out of the water several times and went to the bottom in an attempt to break the hooks, but it was all useless. The fish only hooked harder. Having brought the mahi of the male trophy size to the side, the first mate hucked it with a hook, piercing her torso, showed the trophy to the clients and put it in a drawer.

After that, we tidied up the back deck and again threw out our baits into the water and prepared for the next trophy. But on this day we were no longer lucky with all the other fish, namely, Wahoo and Mahi were not large in size but still pleased our guests.

back to the dock

Already returning back, our guests asked to take a photo and clean the catch so that they could pick up the meat with them in the hotel. We did it with pleasure. Arriving on the dock, we spent the guests before the transfer and agreed that we would see each other again next year.

Ask us any question about fishing trip in Punta Cana