For more detailes ask us a question

Finally, I have some free time to write a fishing report. it will  be about punta cana    offshore fishing. It was the first day after a long period of really huuuge waves. That time they were up to 13 feet!!! According to the forecast, we expected a wave to decline from 6 to 4 feet. We changed the date of this fishing already twice because of the weather conditions.

As usual, I checked the condition of the boat waiting for my customers in the parking lot of the marina Punta Cana. I knew that two couples would come to me and therefore I prepared pills for motion sickness for women.

guest arrival and fishing shall begins

8 am and my guests have already arrived. We met and went to the boat.  20 minutes later we already passed the reef zone.  Malvin, our captain straightened outriggers and Alex began to straighten tackles. two of the four bait were already in the water when suddenly the first bite and the first barracuda. As everyone knows, barracuda is an Atlantic pike, a very cunning fish that can be taken not far from reefs as well as in the open ocean. Experienced fishermen do not really like this fish due to the fact that it is very easy to reel it, as it falls on the hook it does not resist much, but this fish is very suitable for warming up fishing.

So, taking the first fish, we continued to straighten tackle. I changed Melvin and he went to the low deck. The next 2 hours of fishing passed without bites and we were bored. Alex and Malvin carefully cleaned the bait, but I stood at the helm and tried to look out for flying birds on the horizon. Seeing nothing, I decided to take the 720 course and reach the underwater cliff. Turned around the boat, we went in a new direction. My guests today were two couples from the US, they told me about what was happening in their country and I listened with interest to them, when suddenly on the horizon I saw several birds clearly looking for fish, just like me. I took my binoculars and began to watch them, moving towards them and adding a little gas. After 5 minutes, it was clear to me that the birds were hunting and my guests noticed that I started to monitor the birds.

“We are approaching the place of bird hunting! ”I shouted to the guys, slowed down the gas and we slowly began to plow the water. At once 3 fishing rods worked and three mahi-mahi were on hooks. Our guests quickly went down to the lower deck and carefully to reeled the fish out of the water. Alex helped the girls – this was their first deep-sea fishing experience, and Malvin stood on the platform of the boat ready to receive fish. I continued to stand at the upper dock, putting the boat in drift. And three mahi-mahi were already on board. I added gas again and we continued to move to the underwater rock.

Arriving at the cherished place, I began to move in a circle in search of fish. After 20 or 30 minutes, finally the sound of the reel and nothing. The fish bit off the tail of the bait and left. I kept spinning. And again the bite this time is something big. One of the fishermen went down to the lower deck and began to reel. After 5 minutes, I saw a distant blue glow in the water. Either I thought barracuda or Wahoo, and I was right. Big barracuda. When the fish was on board I started moving again. Having done several laps and not finding anything, I decided to go towards our port.

On the way back

But suddenly the birds appeared again on the horizon, I decided to postpone first to check the place where they hunted. Having added gas, I followed the birds. And finally, two bites! This time our guests had to fight, the fish resisted and did not want to give up. But in the end, they were on board 🙂

After this, the course was taken to the lagoon, Melvin returned to his rightful place as captain, and after chatting with the guests I returned to the lower deck. Everything went as usual in the lagoon, guests fall in love with this secluded place with crystal clear water. And of course a super-cooked grilled catch. 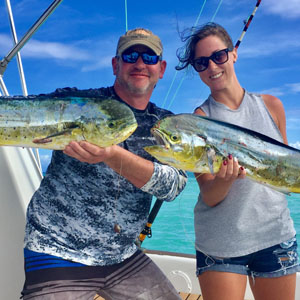 On a recent visit to the Dominican Republic we chartered fishing with Elena and her crew. I have fished these waters with several charter company over the last 10 years and everything about this trip went well. The boat is very clean, her english is very good, and you leave from a marina not a dingy off a sand beach like others. Our trip for 4 started early and on time and I think we were one of the few boats that caught fish that day. At the end of the trip we traveled to a lagoon and the captain grilled on board some of the fresh catch of Mahi as we swam and snorkeled in the shallow waters. Elena is a true owner operator that takes pride in her crew and equipment and does everything to make sure all guests are having a great time. Thank you again and we sill be back!